The Pelo de Oro Scherzo ( 5.5 X 55 ) is another "close out" hit for me at Cigar Samplers! Check out the write-up on these awesome smokes below.

"Pelo de Oro is a rare type of tobacco, once generally used for cigar wrappers. Today, the leaf is considered by most to be one of the toughest crops to grow in any area. Hearty, flavorful, and even a bit sweet, the tobacco was a favorite among the workers who grew and cured the plant in the early-to-mid 20th century. Pelo de Oro translates from Spanish to “golden hair,” a call to the bold color that glistens on a properly refined leaf. Pelo de Oro is both flavorful and beautiful but gains its notoriety from being difficult to harvest. The plant is extremely susceptible to molds and other agricultural diseases and is infrequently implored in today’s cigar landscape. Though phased out of Cuban fields, and castoff by many in the cigar industry due to the difficulty of successfully growing large, healthy batches, it’s therein which lies the challenge to others. The cigar industry is one built on tradition and heritage, and some cigar masters have refused to do away with the golden gem entirely. Boutique Blends founder Rafael Nodal secured a limited batch of Pelo de Oro from fellow artisan and cigar maker AJ Fernandez and announced a special Aging Room release last summer. Aging Room Small Batch Pelo de Oro was crafted at the renowned Tabacalera factory in Nicaragua, and released to universal acclaim from both critics and cigar lovers. Due to the limited nature of the Pelo de Oro batch, the release was crafted in small quantities, a notion that’s complimentary to most Aging Room philosophies. But the reception may not be the only thing that could pave the way for a Pelo de Oro comeback. Cigar makers like Rafael Nodal and AJ Fernandez, along with brands like Aging Room, aren’t your typical cut-and-dry cigar labels. These premium cigar makers strive to create something new and exciting of the utmost quality, something that’s harder and harder to do in today’s crowded marketplace. So taking on a challenge like working with Pelo de Oro isn’t just great for the label, or the lucky connoisseurs who may get to smoke the ultra-premium selection, it also represents an exciting challenge for the maker himself. These types of challenges are the fire to which passion burns best, and no industry runs on passion more than the cigar business. You’d be hard-pressed to find a rarer leaf than Pelo de Oro, and that may just be a good thing. Future releases utilizing the elusive tobacco will perfectly sum up everything the premium cigar industry (should) stand for: tobacco that took time, care, and energy to secure, a distinct and enjoyable flavor complex, and most importantly, heritage. The use of Pelo de Oro won’t only curate an exceptional cigar, it will serve as a celebratory nod to the persistence displayed by the cigar makers of yesteryear."

As you see, this is a special cigar! Get on it while supplies last.
Best,
Jeff 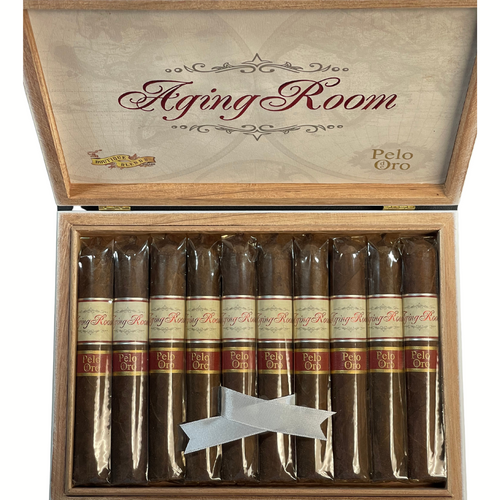